This first session is about the most important elements of design, the interactive elements. The reason for their extreme importance is that they are the ones carrying the functionality of the platform, communicating what can be done and what the platform can do for the users. As a consequence, their affordance defines how ‘smart’ an interface is perceived to be, how fast a task can be performed and how satisfactory the experience is. Hence, interaction design is very focused on the placement and visibility of the interactive elements. When the affordance is low, either due to misplacement, i.e., users can’t find the function because it's placed outside of their current task flow, or due to being misdesigned, as in case of low contrast or an unrecognizable icon, several months of expensive development work goes down the drain.

When building a UI, the designer is in a continuous dialog with the users. Everything put in the interface needs to answer their questions. There are two main questions that enter a user’s mind and need to be answered during interaction design:

Design Tip: Recognisability in the brain starts with determining the shape of an object; hence, if you want to minimize the user’s cognitive load, you might consider keeping the shape of the original physical counterpart (or the shape of a related conventional icon) and customize the other attributes of the icon. In terms of correctness, an icon is correct when it describes the functionality without requiring further associations or guesswork. For example, if the platform offers an avatar editing function, then a ‘pencil’ icon, which traditionally means editing, is correct. However, if the platform offers upload only, then the ‘pencil’ icon is incorrect, since the users only can upload, but not edit the avatar. In this case the ‘tray+up’, the traditional upload icon, is the one true to the functionality. 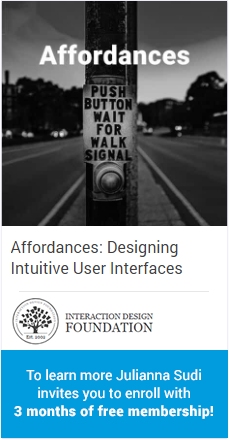